The Nitrogen Cycle is also referred to as “New Tank Syndrome” or just “Cycling”.

Every aquarium owner needs to know about the nitrogen cycle as it’s an important part of maintaining the miniature ecosystem that will exist inside your fish tank. A lot of problems are caused by owners not knowing about this process.

The key to this process is slowly building up the levels of bacteria in your filter. The bacterium is important as it is responsible for 2 of the stages in the cycle.

Take a look at the diagram; it always helps to understand when you can look at a picture. 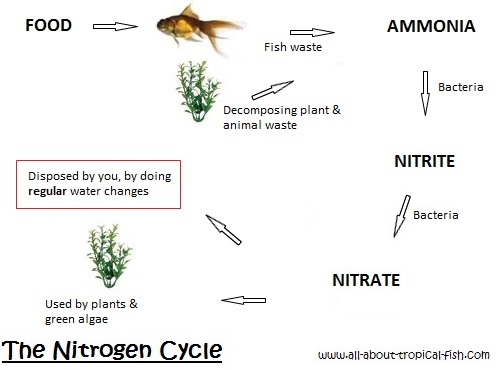 Let’s take a step by step look at the process of the Nitrogen Cycle:

1. The creation of waste products (fish, fish food and plants).

2. Ammonia is created through the decaying process of the waste products in the tank.

3. Ammonia is converted to Nitrite by bacteria cultured in the water filter.

4. Nitrite is then converted to Nitrate by different bacteria in the same filter.

5. Nitrate is either used up by plants or green algae in the tank, or is taken out the tank through regular 10 to 15% water changes.

Now that we know the stages of the Nitrogen Cycle, we can take a look at the effects it will have on your aquarium and how to deal with them.

Every new aquarium needs to go through the cycle until a balance is reached. This normally takes up to eight weeks, but if care is taken should be done in 4 to 5 weeks.

There are a few things that could affect how long this process takes. Not removing all the chlorine or chloromine from the water at the start will slow things down. Adding chemicals to the water in an attempt to speed up the process can also upset the delicate balance during the cycle.

A fresh tank which has just been filled will not have any ammonia, nitrite or nitrate in it (unless there is ammonia left over from the removal of chloromine). So your 1st step would be to introduce some fish into the tank to start the process.

There are other methods to getting the process started, but using fish is the method I prefer and always recommend.

Tip: If you have access to a fish tank that is operational and already been through the nitrogen cycle process, try taking some gravel from it and putting it in with your tank. This will help get the process started.

When you choose your fish that you will use to cycle your tank, you will need to choose a species that will stand up to the changes that go on during the process. You could try some Tiger Barbs or maybe Zebra Danios. Both are hardy fish, but speak to your pet shop owner for advice about what he has available and the price. Don’t buy expensive fish; they may die if you are not careful!

Only start with a small number of fish. This will depend on the type of fish you buy and the size of your tank. If you are a beginner and your tank is relatively small, only 2 or 3 small fish would be required.

It is important not to start off with too many fish. The ammonia levels in the tank need to be brought up slowly, so that the bacteria have time to grow. If the ammonia rises too quickly the bacteria will not be ready to process it quickly enough and your fish may die.

After 4 to 5 days I would recommend taking a water sample to check the ammonia levels and for the presence of Nitrite. If all is going well, there should be trace levels of nitrite and ammonia levels will be high.

This is a good time for a 10% to 15% water change. The clean water at this point will help reduce the stress caused by the high levels on ammonia. Remember to prepare your water properly before you put it in! (Refer to Removing Chlorine & Chloramine )

After 7 or 8 days the level of ammonia should have dropped by itself. This is because the bacteria have grown to a point where it is capable of processing the ammonia as it is created. Nitrite levels will be on the rise.


Remember your small 10% to 15% water changes every 5 to 7 days! Also test your water to make sure the process is running to plan.


The bacteria required to convert nitrite into nitrate can take a long time to form. Your tank should stay with zero ammonia and high nitrite levels for 3 to 4 weeks. It will be your small water changes at this point that keep your fish alive.

At around the 4 week point you should notice that nitrate is present in the tank and the levels should be on the rise. This means that the bacteria needed to break down the nitrite has formed and should quickly multiply. Nitrite levels should be dropping by itself.

What you need to look out for now is the point at which the ammonia and nitrite levels are at zero and the nitrate level is slowly rising. Your tank should be cycled at this point and ready for you to slowly add more livestock. You should also notice that the fish used for the cycling process should be more alive and active once the process is complete and the balance of chemicals in the water is right.

This is something that you don’t want to happen!


There are a few things that could cause this to happen. Over-cleaning the tank seems to be the most common reason. Removing too much of the bacteria out of the filter during cleaning will cause the tank to cycle again. If you take away the bacteria the levels of ammonia and nitrite will rise straight away.

Adding water to the tank that still contains Chlorine or Chloromine is another cause for starting a new cycle. The chlorine will kill of the bacteria in the filter causing the ammonia and nitrite levels to rise.

You should avoid any shock changes to your aquarium. Add fish only a few at a time, only do small water changes, that sort of thing. Baby steps!

The major downfall of a Nitrogen Cycle in an established aquarium is that your livestock in the tank may not be as hardy and as cheap as would be used for the cycling process. These fish may die off. When you combine this with the fact that you may not even know that your tank is cycling the results can be disastrous!

Home | Blog | Privacy & Disclaimer | Contact Us
© 2010 to 2016 All About Tropical Fish , All rights reserved.
Unauthorized duplication or publication of any materials from this Site is expressly prohibited.